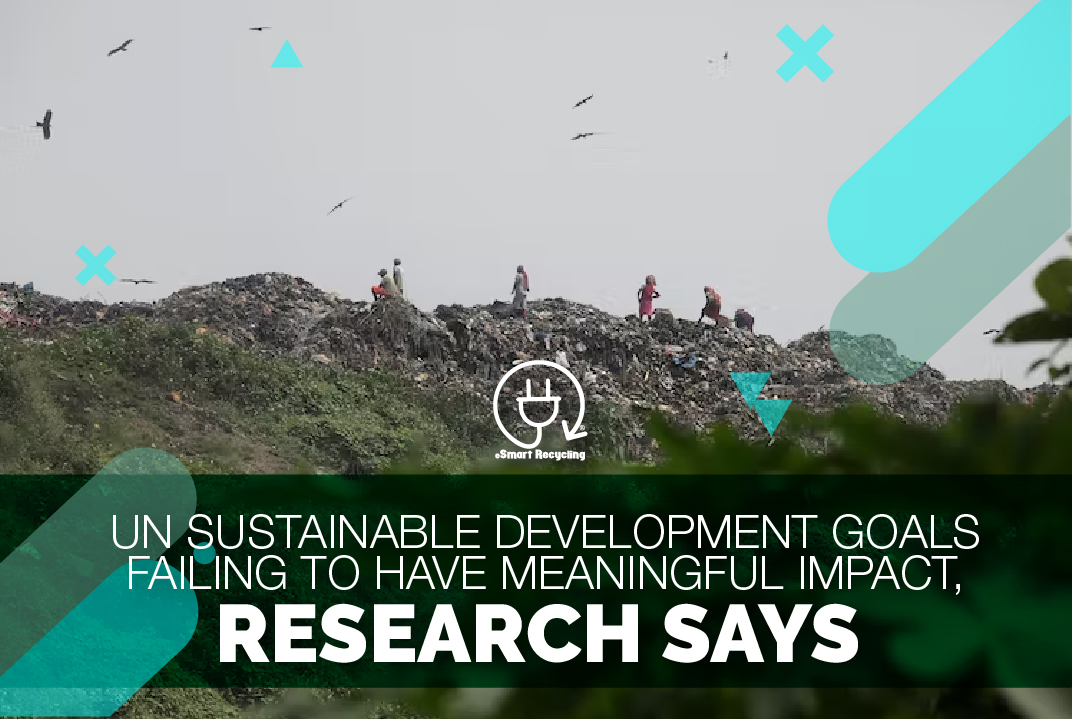 In September 2015, leaders from 193 countries gathered in the UN assembly hall in New York to plan nothing less than “transforming our world”. It was the birth of the sustainable development goals, which aimed to “free the human race from the tyranny of poverty and want and to heal and secure our planet.”

These 17 sustainable development goals, or SDGs, also include 169 detailed targets and over 200 measures of progress. Reducing poverty and hunger, education, gender equality, sanitation, energy, economic growth, and infrastructure, ensuring sustainable consumption, protecting the climate, ocean, biodiversity, and forests, and furthering peace and justice, are just examples of topics the UN wants to impact.

The 17 flags of the sustainable development goals are everywhere in the lush gardens of the UN headquarters in New York, and posters listing the sustainable development goals hang in government offices all around the world. Dozens of international meetings discuss them each year. The UN even announced an international decade of action for achieving the goals.

Frank Biermann, Professor of Global Sustainability Governance at Utrecht University considers that it is fair to ask: do these global goals change anything? Do they tangibly influence the actions of governments, business leaders, mayors, UN bureaucrats, and university presidents? For the last few years, a growing community of social scientists has considered this question, states Biermann in an article published by The Conversation. He and 61 colleagues from around the world analyzed more than 3,000 academic studies that scrutinized aspects of the sustainable development goals.

Too much talk and no action

Unfortunately, the team’s findings are not so encouraging. The SDGs have infiltrated the things people say, think and write about global sustainability challenges. Governments mention the sustainable development goals in their national reports to the UN, and some have set up coordinating units to implement them. Multinational corporations like to refer to the SDGs as well – especially those goals that are least disruptive to their commercial activities. And unsurprisingly, UN organizations are all formally supportive of the SDGs.

But nothing has changed where it matters. Frank’s team found few new policies, institutions or budget allocations designed to further specific goals. Did any government change its laws to achieve the many intersecting transformations envisioned by the SDGs? Did any ministry in those governments create new programmes for implementing the sustainable development goals? If so, there is little evidence of it. What we found instead are changes in discourse. Those in power now refer to the SDGs often. Yet the way they govern has not changed.

Optimists point to the SDG timeline: the SDGs were only agreed upon in 2015 and are to be achieved by 2030. The governments of the world have eight more years to go. But corporations and them talk differently about sustainability and refer to the SDGs more often today can be seen as a sign of hope that this talk will lead to action in the near future.

And yet, talking about projects and plans for the future can backfire by conferring legitimacy on unsustainable behavior, letting corporate leaders wave colorful SDG flags while prizing profits above all else. Simply talking about SDGs can demobilize civil society by creating a false impression of action. Even as promised, transformations remain elusive. Idle talk acts as a smokescreen, hiding the reality of delay and stagnation.

According to Biermann, the study only provides a snapshot of the present state of implementing them. “The SDGs do reflect some wonderfully high-minded global ambitions, not least by focusing on global inequalities (SDG 10), necessary improvements to national and global institutions (SDG 16) and the reduction of harmful consumption patterns in wealthy countries (SDG 12)”, states his article in The Conversation.

The professor also says that, as a society we have to make the goals actually work. “Social movements need to prick the bubble of SDG talk. Government leaders and industry bosses must not be allowed to hide behind SDG flags in their offices, SDG buttons on their lapels and SDG logos on their glossy pamphlets. The SDGs cannot remain a lofty inspiration. We must convert their promise to action”, he wrote.

At eSmart Recycling, we are also committed to supporting a sustainable future for our planet Earth. That’s why we recycle computers and use part of the proceeds to return them in the form of computers to donate to underprivileged children and families. In this way, we ensure a more competitive future for students and the workforce.