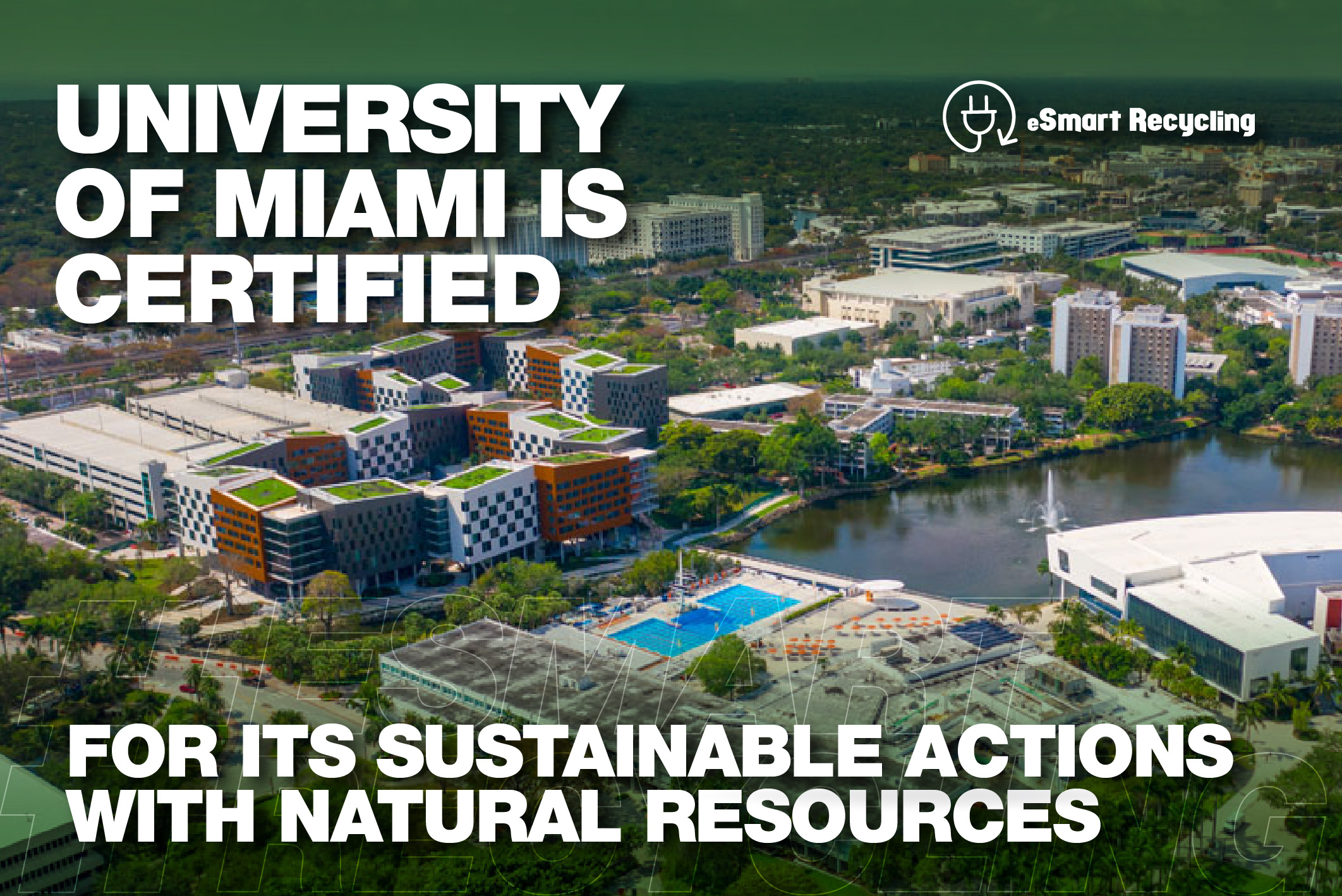 Efforts to carry out sustainable actions such as waste recycling or electronic recycling deserve to be recognized. Fortunately, different organizations are in charge of accrediting and congratulating companies for their environmental actions. In addition, they motivate them to continue on the path of sustainability. This time it was the turn of the University of Miami, which has received the Platinum Green Business Certification by the City of Coral Gables.

Last September, the educational institution obtained platinum level recognition for the multiple sustainability initiatives that have already won them awards. Coral Gables is the institution in charge of accreditation and evaluates the different actions performed by the companies as part of their commitments. Some of these include solid waste reduction, recycling, energy and water conservation, pollution prevention, transportation alternatives, environmental policy, and education.

Jessica Brumley, the vice president of the Facilities Operations and Planning Department expressed her excitement about the accreditation. “It is such an honor for the University of Miami to be receiving this recognition as the first platinum level Green Business within Coral Gables. It means so much to receive this award from the City of Coral Gables, which holds itself to an extremely high standard when it comes to sustainability initiatives and has received multiple awards itself.”

Taking actions to get rewards

Teddy L’Houtellier, sustainability manager at the University of Miami’s Office of Sustainability, said a combination of sustainability efforts were the reasons for the platinum. Over the past decade, the educational institution has been conducting activities in commitment to the city’s sustainable plans. In 2007, they signed the Second Nature Presidents’ Climate Leadership Commitment, a leader in climate education in higher education nationwide.

One of the pledges was to reduce carbon emissions by 20 percent by 2020. To achieve the goal, the University of Miami pledged that all of its new buildings on campus would receive a minimum of LEED Silver certification from the U.S. Green Building Council, which designation indicates that buildings mitigate their impacts on the surrounding environment. In this way, it is possible to have a long-term solution within the university’s activities.

It is for this reason that last year, the University of Miami met the goal of reducing carbon emissions by 20%. Many of its campus buildings have even surpassed that silver designation. “In recent years, most of our buildings are reaching gold LEED certifications,” said L’Houtellier. “The buildings are not only using less energy, less water, and less waste, but also using recycled salvaged materials. So, it’s a more comprehensive approach to green building.”

Natural resources are the main advantage

An example of this is the Patricia Louise Frost Music Studios building, which has a LEED Platinum certification for its features. The infrastructure includes rooftop solar photovoltaic panels, electrochromic windows and a rainwater harvesting system. This space is an example of how technology has been implemented to take advantage of natural resources.

But the university doesn’t slacken off. It is currently collecting data on the Coral Gables and Marine campus to help develop a new sustainable action plan for 2025. Last August, the University of Miami already began a transition to solar power. That action is part of Florida Power & Light’s Solar Together program, which will work to eventually move the university to 100 percent renewable energy. With this goal, it will become one of the largest higher education institutions in Florida to harness solar energy to power the entire campus.

The reuse of resources is an alternative in sustainability initiatives. Recycling is one example. That is why at eSmart Recycling we work with electronic recycling to generate funds that allow us to donate computers to those who need them most. To date we have collaborated with children in our community in Tampa, and also in other emerging countries. Our commitment to the environment and society will continue.